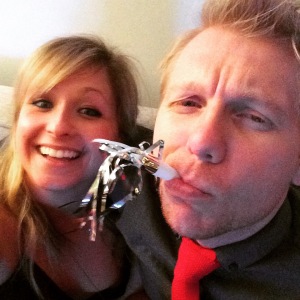 As soon as Christmas ends, I get the same feeling every year. That restlessness that resonates through my bones. The feeling that I need to step up to the plate and be a better person next year. I spent so many hours watching Netflix, I always think. Imagine what I could have done in that time!

I have six days between Christmas and New Year’s Eve to come up with resolutions that I swear I will devote myself too, carve out time for and prioritize. No, seriously. I actually believe I can do this every year. And every year, I am not as dedicated to the things that I vow are so important to me. These things generally aren’t about losing 10 pounds or making it to the gym every day.

Last year I resolved to write a novel and learn how to better use Photoshop and Illustrator so I could improve the work I do every day (presumably helping further the mission of the nonprofit I work for by doing this). I wanted to learn how to code so I know more than the most basic commands. I wanted to volunteer at an animal shelter, work on my photography and enter short story contests until my ideas ceased to flow through my fingers and into my keyboard.

I didn’t do all of these things. However, I did accomplish some of these goals, even with a full time job and lengthy stretches of being laid out after two spinal surgeries. Reflecting on this past year, I realized just how I was able to accomplish some of the goals on my list, even during what I considered the toughest year of my life thus far. The one thing that was different this year was the lack of the busy trap. It didn’t exist because I physically couldn’t do a lot of the things that had previously trapped me.

I couldn’t go to the gym after work, cook dinner, clean or bake for a big stretch of this year thanks to overwhelming pain and a prolonged recovery. I couldn’t grab drinks with friends as much or go shopping. Even the frequency in which I did errands to buy basic household items decreased. Generally, I didn’t have the energy to do much more than lie on the couch, and conveniently a lot of my goals for 2014 involved doing just that with a laptop propped on my stomach.

A few of the things listed here are necessities, but even when I took those on, I did it in ways that were simpler and less time consuming. Dinner became broccoli and rice and friends visited my apartment so we didn’t have to trek somewhere that would inevitably cause pain (and where we would undeniably spend more money). I realized that I could get by with washing my hair with travel shampoo that I had lying around when I ran out of the supply that usually sat on the corner of the bathtub ledge. And frankly, after this year, washing my hair even seemed too time consuming. I simply didn’t put as much effort into things that now seemed insignificant in comparison to everything else I had experienced this year. That left a lot of time for the significant tasks like accomplishing the goals I had made at the dawn of the new year.

As we move into 2015 and I get stronger and more recovered every day, I remind myself to not get stuck in the busy trap when I am well enough to galavant around the city again and create reasons to procrastinate accomplishing my goals for the coming year. It took me being at my very worst to actually become the best version of me. I wish that 2015 brings out the best version of you when you’re at your very best.