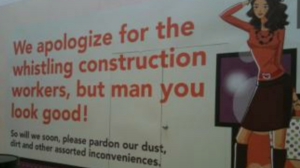 Last week Katarina Hybenova, founder of Bushwick Daily, wrote a post called Catcalling is NOT Flattering, why I stopped running in Bushwick. I was immediately intrigued because as a female who has been catcalled and someone who also resides in this lovely corner of Brooklyn, I related. As I read her story and absorbed her experiences, I nodded along as I recounted my own: groped on this street corner, followed home as men hurled stomach-churning comments my way near my apartment and shocked when a man asked me how much it would cost to spend the night with me after I walked out of a bodega.

I have lived in cities for about four years now and have been catcalled in all of them. I absolutely agree with Katarina that Bushwick has been the worst thus far. The men who prowl the streets say worse things, come closer to me and often don’t back down when I am walking with my boyfriend.

I didn’t give up running, but I did crank up my music while running, walking or sitting in parks in my neighborhood. I look at the ground more near my apartment than I do in any other neighborhood, lest I lock eyes with someone and it starts: the confrontation, the lewd remarks, the feelings of vulnerability and weakness…

And that is the point of catcalling, isn’t it? It’s a power trip that has the potential to make women feel weak. I am assuming that it has nothing to do with appearance as men hooted and whistled at me one time when my eye was swollen shut and another right after I had back surgery and was dragging myself along with a walker to get into my apartment. (It’s even less enjoyable when you can’t quickly escape the situation.)

Katarina’s post responded to an article written by Doree Lewak in the NY Post called Hey, ladies – catcalls are flattering! Deal with it. I read that piece too, expecting to be shocked and angered. But Doree framed her stance on these grounds: “…When I know I’m looking good, I brazenly walk past a construction site, anticipating that whistle and ‘Hey, mama!’ catcall. Works every time — my ego and I can’t fit through the door!”

This is where we need to make an important distinction.

Catcalling is a broad term that covers anything from a whistle and a “hey, baby” to words that are much worse and actions that should more appropriately be labeled harassment. I have experienced both, and I think that writing an article that says catcalling is flattering to some, may enable people who already do it. It also may condone this type of harassment that already doesn’t have a lot of consequences.

Is the root of the issue that catcalling is such a broad term that it is difficult to know where that line stops and harassment begins? Are there nice types of catcalling and horrifying types? Does it your experience and the way these hoots and hollers make you feel depend on your zip code? Most likely, yes, to all of the above.

Let’s look at what catcalling – as a broad term – does to many women. Many of the same women who enjoy compliments and maybe even a whistle from a stranger don’t enjoy harassment. Many women (myself included) have changed their lifestyle because of the more harassing types of catcalling. I know that whenever I wear a dress (even a baggy one) I should walk as fast as I can and keep my eyes locked on the ground and my headphones in. I know that I should walk on the other side of the street until I am directly in front of my apartment building because the same group of guys jeer at me from their stoop when I walk past. And I know that I shouldn’t have had to change my location at a local park this weekend four times – four different benches on opposite sides of the park – until I found a spot where I could sit quietly and listen to music without men approaching me and saying explicit things.

Katarina suggests going to iHollaback.org to join the fight to end catcalling so women can feel safe walking down the street, wear what they want and not be afraid to go for a run through their own neighborhood. This is a great start, and I am hoping that these articles start a larger conversation about action that can be taken. Bitch Magazine talks about laws that can be used to crack down on this, but admits that verbal harassment is the hardest flavor of harassment to crack down on. In the Washington Post, Alexandra Petri suggests responding in “catty” ways such as hissing or clawing through the harasser’s shirt.

We may not yet have a perfect solution, but let’s continue the discussion so men and women don’t become inoculated to it and assume, from both perspectives, that it is just something that is a part of life.

One thought on “Blurred Lines: Where Does Catcalling End and Harassment Begin?”